”Hope we’ll survive”: what is written on university walls in Mariupol where children used to hide during siege 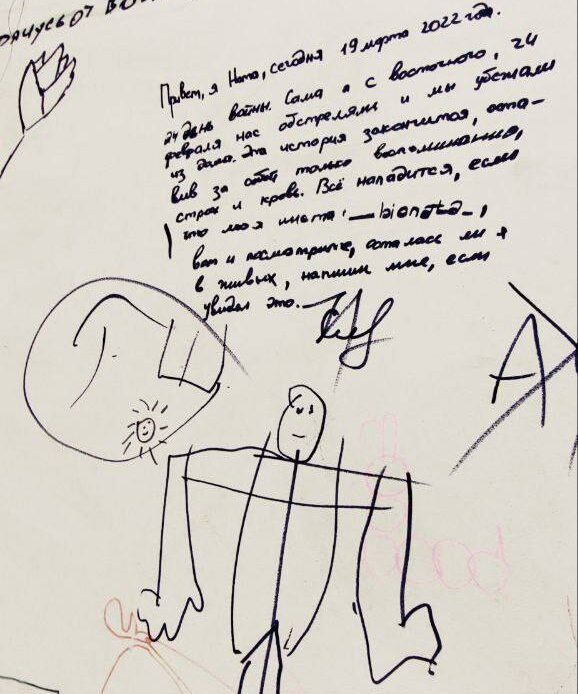 “We hope we will survive”, one of the inscriptions left by the children of the city of Mariupol on the walls of the Pryazovskyi State Technical University (PSTU), where they hid during the siege of the city that is now occupied.

The Mariupol City Council published the photos of the writings on the walls.

“They (children) left them (the inscriptions) while they were hiding in the building of the PSTU during the siege of the city”, the City Council explains.

One of the girls is called Nastia. She is from the village of Skhidne in Kherson Oblast. This is what she wrote on the wall of her temporary shelter on 19 March 2022:

“We were under attack on 24 February and we fled our home. This story will end, leaving behind only memories, fear and blood.”

Another girl called Dina wrote on another wall of the PSTU building:

“The Left Bank (of Mariupol – ed.). The Leninhradskyi Avenue. We hope we will survive. To the people who used to live here: thank you for your help and memories.”


An 11-year old boy called Rostyslav was hiding in the building of the university together with the girls. On 12 March 2022 he did not write much, but even back then it was probably clear that whatever Russians were doing to Mariupol was only the “beginning”:

“The war is ongoing. The beginning.”


The fate of these children is unknown.

“Such writings on the walls bring back horrifying memories and make every Mariupol resident feel pain. They remind us of those terrifying days when nobody knew if they would make it until the next hour, or the next day…

These stories will stay with us forever. Because this is our common memory about the tragedy of the peaceful city of Mariupol which was destroyed and killed by the Russian occupiers”, the Mariupol City Council stated.

Note: Petro Andriushchenko, advisor to the mayor of Mariupol, reported that as of 20 December, 11,000 schoolchildren remain in the Russian-occupied city of Mariupol.