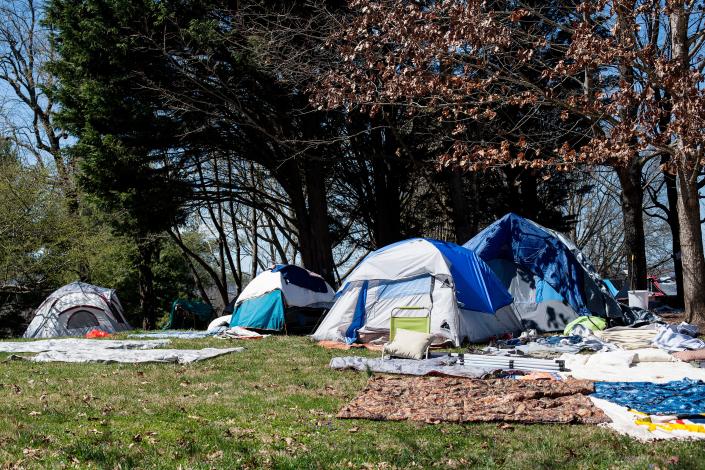 ASHEVILLE – The American Civil Liberties Union of North Carolina, Freedom of the Press Foundation and Committee to Protect Journalists have petitioned the Buncombe County Superior Court for release of police body camera footage from Dec. 25, 2021, the night two Asheville reporters were arrested while covering a homeless camp clearing in Aston Park.

Last winter, Aston Park was the focal point for a number of sanctuary camp demonstrations that culminated in the arrests of six individuals, including Asheville Blade reporters Matilda Bliss and Veronica Coit.

The court filing, a copy of which was obtained by the Citizen Times, is dated Jan. 24.

Seth Stern, director of advocacy for Freedom of the Press Foundation, a New York-based nonprofit, told the Citizen Times that the “most important factor” of the 182-page petition is the public interest in the footage.

“One, it relates to a controversial eviction on Christmas night of houseless people from a public park. The fact that police conducted that operation, in it of itself, is of very significant public interest, and has been the subject of media coverage, public debate and comment and extensive local controversy,” Stern said.

“But when you add to that that police took the extremely rare step of arresting two journalists, and journalists who had previously been critical of police on this specific issue of encampment sweeps, that magnifies the public interest. And not only were the journalists arrested, but they’re being put on trial, which is exceedingly rare.”

In January, Stern wrote a guest op-ed in the Citizen Times calling for prosecutors to “drop retaliatory charges” against the Blade reporters.

Asheville police did not immediately respond to a request for comment.

Bliss and Coit are charged with misdemeanor second-degree trespassing. Classified as a Class 3 misdemeanor, the charges carry a penalty of up to 20 days in jail or a $200 fine.

According to arrest reports, the individuals were arrested Dec. 25 around 10:45 p.m. The city park closes at 10 p.m….