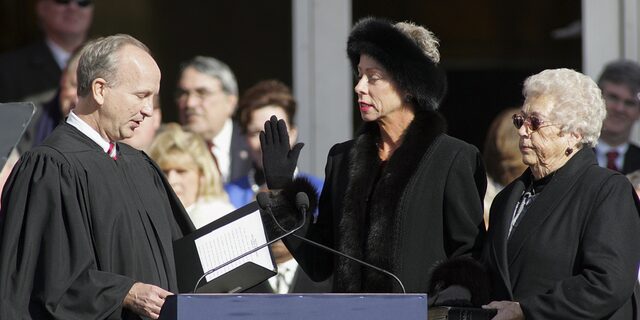 A longtime North Carolina elected Democrat is refusing calls to resign Tuesday after being charged in a hit-and-run incident in which Raleigh police say she drove her state-issued vehicle into a parked car and then walked away from the scene.

North Carolina State Auditor Beth Wood, who has been in the position since 2009, is now set to appear in Wake County court Thursday following the collision on Dec. 8, which she says happened after leaving a holiday gathering.

“I was at the event for approximately two hours. When I left, I made a sharp right turn and inadvertently hit a parked car,” she said in a statement on Monday.

“I was shaken by the incident and, when I was unable to move my vehicle, I left the scene,” Wood added. “That was a serious mistake and I regret my decision.”

No one was hurt in the accident and Wood, 68, was driving her state-assigned vehicle, a 2021 Toyota Camry. Photos and 911 calls reported on by media outlets show that part of her car was on top of the parked vehicle.

The state auditor, one of 10 members of the North Carolina Council of State, performs financial reviews of state agencies, as well as performance audits and other studies sought by the General Assembly.

The North Carolina Republican Party is now calling on Wood to resign, writing in a tweet that the state “deserves better.”

“While the car accident may have been a mistake, the decision to sneak away from the scene was intentional and wholly unbecoming of an elected official,” the tweet read.

The North Carolina Democratic Party did not immediately respond to a request for comment Tuesday from Fox News Digital.

FLORIDA DEMOCRATS AGONIZE OVER INTERNAL ‘CHAOS’ AND CRUSHING 2022 STATE LOSSES: ‘THERE IS NO PLAN’

Wood performs financial reviews of state agencies, as well as performance audits and other studies sought by the North Carolina General Assembly, whose legislative building is seen in this image.
(Google Maps)

Sam Chan, a spokesperson for Democratic Gov. Roy Cooper, said in a written statement that Wood’s collision “was a troubling incident and the Governor is glad that the Auditor has…