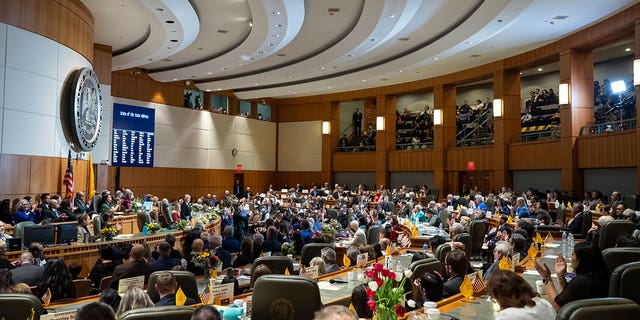 The Republican also proposed stiffening criminal penalties, creating a new state office to expand school choice and raise state employee pay 12% over the next two years. He insisted all the initiatives can be accomplished without any new taxes.

Lombardo also announced plans to join Tesla CEO Elon Musk on Tuesday to unveil a new facility to unveil plans for a $3.5 billion-dollar manufacturing facility in northern Nevada. It’s part of his determination to further diversify Nevada’s economy that is heavily reliant on casinos and tourism.

Lombardo’s lofty legislative goals took center stage in his first State of the State address in a packed assembly chamber in Carson City, setting the stage for how he’ll work with the Democratic-controlled legislature after his razor-thin victory in the western swing state.

The speech was met with a tepid response from the Democrat leadership, who said during a press conference after the speech that there were parts with which they agreed and disagreed, many proposals “left more questions than answers” due to what they called a lack of specifics.

Lombardo said “not a penny” of the unprecedented surplus will go toward recurring funding in the two-year $11.4 billion budget. Rather, he said his plan emphasizes savings and one-time programs such as the gas tax suspension and $313 million to the Rainy Day Fund, which is used in emergencies.

Lombardo proposed adding $313 million in what he announced as the “Nevada Way Fund,” another savings fund to be used for infrastructure and development projects once the traditional Rainy Day Fund reaches 25%.

“In simple economic terms, we’re buying with cash instead of credit,” Lombardo said.

Along with the creation of the Office of School Choice within the Nevada Department of Education, Lombardo announced $50 million in funds for opportunity scholarships, a program a Republican majority created in 2015. That allows vouchers to go toward tuition for low- and middle-income students who want to attend private schools, which was previously paid for by…