‘Oh God! You made it!’: FL diver rescued by family after being swept out to sea by current 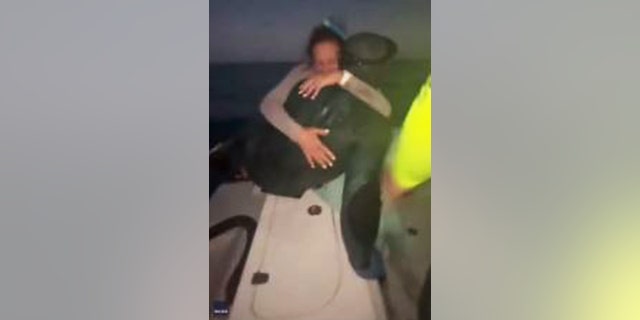 Remarkable video going viral on social media shows a Florida family reuniting with a loved one who was lost at sea for hours after a current swept him away while diving.

A friend called the cousin of missing Dylan Gartenmayer around 5:45 p.m. Jan. 19 after two hours of searching for the 22-year-old off the coast of Key West with no luck.

“We were told that he went down for a dive and did not resurface. So we were thinking the worst,” Priscilla Gartenmayer told Storyful. She and her boyfriend frantically took her grandparents’ boat out and set sail for the area Dylan’s friends last saw him.

There was no sign of him as the sun continued to set. Priscilla, familiar with the area, thought her cousin would attempt to swim to a nearby reef if he saw it, but the reef was over two miles away located off the Boca Chica Key.

A strong current washed a 22-year-old diver away from his boat. His family pulls him from the chilly water and hugs the man they feared they lost.
(Priscilla Gartenmayer via Storyful)

“Before we even completely stopped the boat to start looking, Joel Cruz [Gartenmayer’s boyfriend] spotted Dylan near the channel marker that marked that reef,” she said. “The joy we felt in that moment is indescribable.”

The video shows Dylan being hugged by his family as he’s pulled aboard. “Oh Dylan! Oh my God, you made it! Oh God, Dylan,” can be heard. The family cried tears of relief and joy.

“Oh Dylan! Oh my God, you made it! Oh God, Dylan,” can be heard in the now viral sea rescue video.
(Priscilla Gartenmayer via Storyful)

“Shortly after, the Coast Guard came and picked him up to check his vitals. His core temperature was slightly low, but besides that he was perfectly fine.” Gartenmayer said. “We later were able to pick up Dylan from the Coast Guard station and bring him home.”

Dylan was free diving when the current carried him away underwater. When he surfaced, he could not locate the boat he had been on with two other men. He swam to the buoys marking the reef and clung for life.

The buoys marking the reef where Dylan Gartenmayer clung for life before being rescued by his family.
(Priscilla Gartenmayer via Storyful)

“The water temperature was around 78 degrees, according to the National Oceanic Atmospheric…