‘Retire now or get fired’: Senate predictions spell trouble for Democrats in 2024 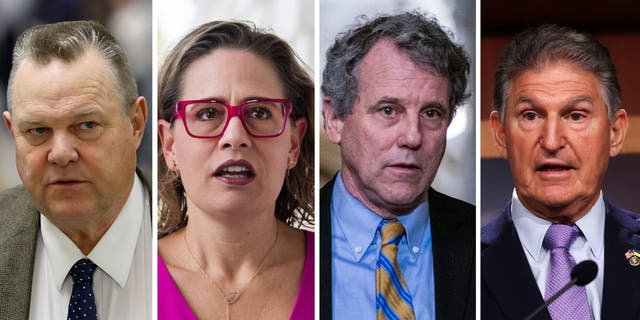 The Cook Report released its first predictions for the 2024 election season, dropping new Senate ratings that do not look promising for several members of the Democratic Party while most GOP seats are expected to remain red.

Brown is the only “toss-up” to already announce a run for re-election next cycle. The Democrat, who revealed in November that he would be seeking re-election in the Buckeye State, has survived three terms in the Senate, even as past elections indicate Ohio voters are moving to the right.

Sinema recently exited the Democratic Party to register as an independent, a move that potentially opened the door for opposition from both the right and the left if the senator decides to seek another term. While Sinema has not announced her re-election plans, Democratic contenders are already entering the battle for her seat.

The most vulnerable Democratic senators in 2024 are, from left, Jon Tester of Montana, Kyrsten Sinema of Arizona, Sherrod Brown of Ohio, and Joe Manchin of West Virginia.
(Getty Images)

Manchin recently introduced the Democrats’ major spending package, the Inflation Reduction Act, alongside Senate Majority Leader Chuck Schumer, D-N.Y. According to a study by the University of Pennsylvania Penn Wharton, the bill will only reduce annual inflation by 0.1 percentage points over the next five years.

“West Virginians made it overwhelmingly clear they reject Joe Biden and his far-left agenda, but Joe Manchin sold them out when he led the way on Biden’s anti-coal, green energy boondoggle,” the National Republican Senatorial Committee (NRSC) spokesman Philip Letsou said in statement regarding Manchin’s re-election chances. “Joe Manchin has a simple choice: retire now or get fired in 2024.”

Of the Republicans with terms ending in 2025, none are considered to be toss-ups according to Cook’s ratings.

Sen. Rick Scott was the only Republican up for re-election whose seat isn’t considered “lean Republican.”
(Lev Radin)

Among the 10 GOP senators whose terms end in 2025, only one seat was not considered solid Republican – the one held by Sen. Rick Scott, of Florida, whose…