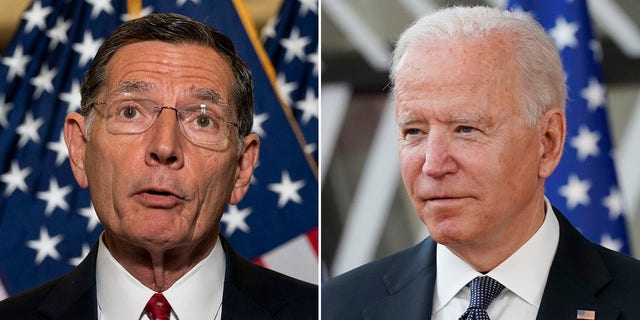 The first bill, the Secure Auction for Energy Reserves Act which Barrasso introduced with Sen. Susan Collins, R-Maine, would prohibit the federal government from selling SPR stocks to China and other countries of particular concern. Earlier this month, the House passed similar legislation, the Protecting America’s Strategic Petroleum Reserve from China Act, by a margin of 331-97.

“Our legislation will ban SPR sales to China and other hostile nations,” he continued. “It will also ban SPR sales to state-owned companies which purchase oil from Russia, Iran, and other nations the U.S. has sanctioned. Adversaries cannot be allowed to benefit from America’s security reserve.”

REPUBLICANS PLAN OVERSIGHT INTO HOW BIDEN ADMIN’S GREEN PUSH BENEFITS CHINA: ‘NOTHING IS OFF THE TABLE’

Collins added that it is “inexcusable that our emergency stockpile of crude oil is being sold to dictators overseas.” She said legislation was necessary to ensure Americans primarily benefit from future SPR releases.

Over the summer, the Biden administration was heavily criticized after reports that it had sold SPR oil to China which reportedly used the stocks to bolster its own reserves. The White House then fired back, saying it was legally required to sell the oil to the highest bidder.

BIDEN DRAGGED FOR TOUTING GAS PRICE DROP AS AMERICANS STRUGGLE TO MAKE ENDS MEET: ‘WHAT PLANET ARE YOU ON?’

The second legislation Senate Republicans introduced Tuesday, the Strategic Production Response Act, would require the Department of Energy to only tap the SPR when there is a severe energy supply interruption and not until the Interior Department issues a plan to increase oil and gas production on federal lands and waters.

“America is stronger and safer when we are energy independent,”…