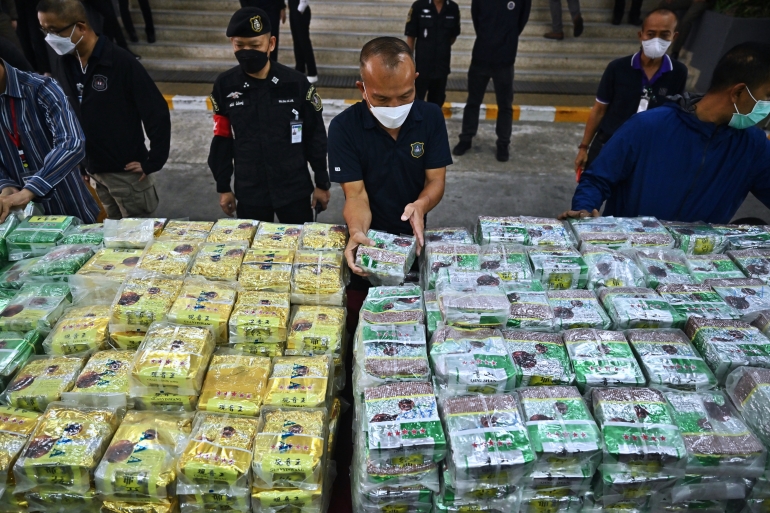 Large hauls of crystal meth were smuggled inside tea and coffee packages and hidden in secret compartments of vehicles.

Police in Thailand have seized more than one tonne of crystal methamphetamine in less than a week amid a surge in narcotics trafficking since the country’s borders reopened after COVID-19 lockdowns.

The haul was uncovered in a series of drug busts in the north and south of the country and 10 people have been arrested.

The 1.145 tonnes of crystal meth – smuggled inside tea and coffee packages and hidden in secret compartments of vehicles – was being transported from Thailand’s north and northeastern region to border areas in the south of the country for onward shipment, the Narcotics Suppression Bureau said in a statement on Tuesday.

“We have seized narcotics, crystal methamphetamine, amounting to more than 1.1 tonnes from all of the total confiscated objects,” said Chinnapat Sarasin, deputy commissioner general of the Royal Thai Police.

“Crystal meth is mostly exported to other countries through Thailand due to the convenience in transportation,” he said.

“Some of these drugs were kept for a period of time before being transported to the southernmost provinces, and they were supposed to be shipped to other countries later.”

The COVID pandemic had prevented traffickers from moving their hauls, Chinnapat said, noting that Thailand was “surrounded by drugs manufacturing hotspots”.

“Now that the country has been reopened, the pent-up products are just being shipped in non-stop,” he said.

In the first bust, a large haul of crystal meth, also known by the street name “ice”, was found in two raids in the southern Thai provinces of Phatthalung and Surat Thani. Police then arrested three men after they discovered another haul of crystal meth in three pick-up trucks. They believe the drugs were smuggled into Thailand’s northeast before being transported south.

On Sunday, another man was arrested in northern Chiang Rai province as he prepared to transport ice – hidden in teabags – south to Satun province. Police also arrested four people after finding drugs being sold via the popular Thai messaging app LINE. Finally, methamphetamine hidden in coffee packages was confiscated in central Nakhon Sawan and Patum Thani provinces and two men were…