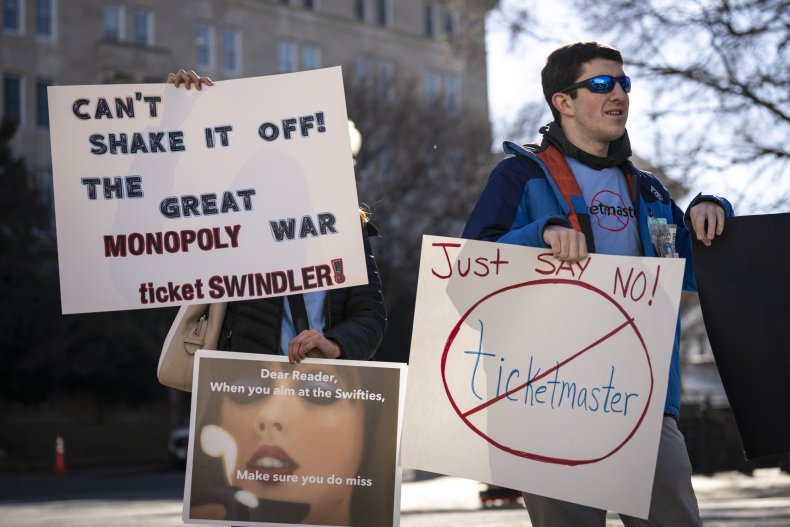 The entertainment company Live Nation managed to bridge the partisan gap in Congress today as Senators on both sides of the aisle scrutinized the company over its business practices and grip over the live entertainment industry.

During a Judiciary Committee hearing today attended by Newsweek, Democratic Senator Amy Klobuchar, who chairs the antitrust subcommittee, made the case that Live Nation’s dominance over the market was a reason why Live Nation’s Ticketmaster system failed customers in November eager to purchase tickets to Taylor Swift‘s The Eras Tour.

“To have a strong capitalist system, you have to have competition,” Klobuchar said in her opening statement. “You can’t have too much consolidation, something that unfortunately for this country, as an ode to Taylor Swift, I will say we know ‘All Too Well.'”

Klobuchar went on to state that Live Nation controls “about 70% of the big concert market” and “owns many of the major venues.” Because of the company’s size, she said mishandlings like the Swift concert situation are met with “few consequences,” saying “this is all a definition of monopoly.”

Live Nation Entertainment’s President and Chief Financial Officer Joe Berchtold refuted this claim, stating that ticketing markets have “never been more competitive” and that Ticketmaster “has lost, not gained, market share” since it merged with Live Nation in 2010.

He also said that the company has invested “over $1 billion” toward improving the Ticketmaster system. Despite this, he said that “unprecedented demand” for Swift tickets resulted in the company being hit with “three times the amount of bot traffic than we have ever experienced” as ticket scalpers aimed to profit off the tickets.

Berchtold comments were not ultimately enough to convince lawmakers of Live Nation’s innocence.

“Mr. Bechtold, I want to congratulate and thank you for an absolutely stunning achievement—You have brought together Republicans and Democrats in an absolutely unified cause,” Democratic Senator Richard Blumenthal of Connecticut said. “As I hear and read what you have to say, it’s basically, ‘it’s not us,…