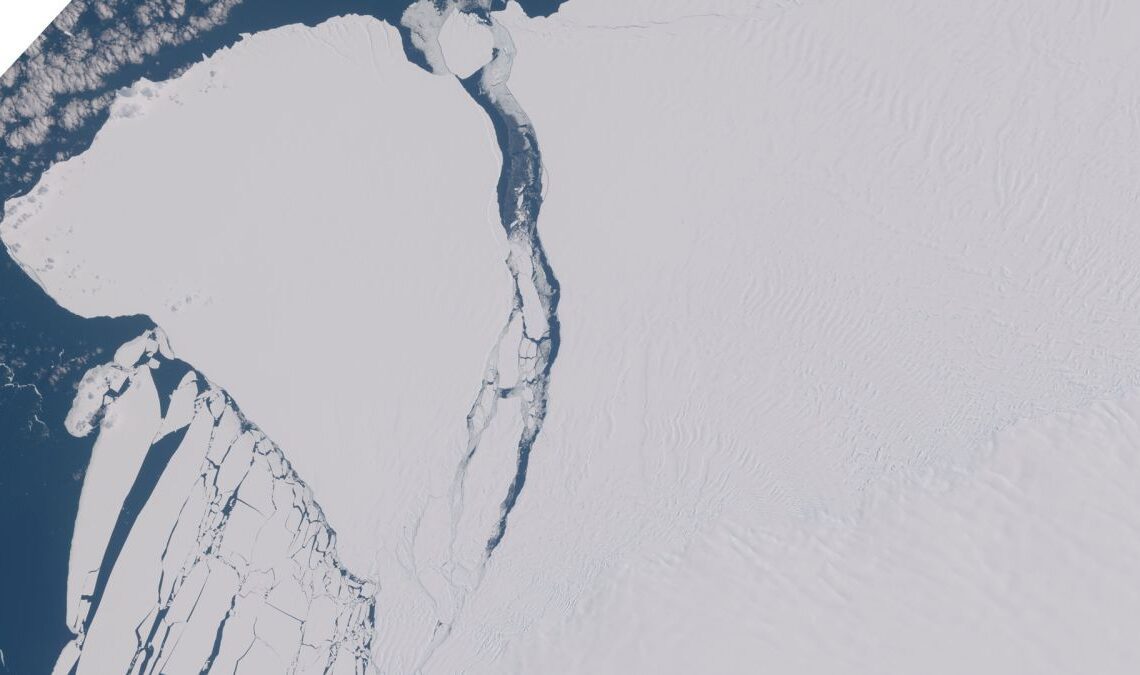 A giant iceberg almost the size of London has broken off the Brunt Ice Shelf in western Antarctica on Sunday (Jan. 22) after years of cracking.

The shelf calved during the spring tide, the regular swelling of the ocean that coincides with full and new moons, according to a statement (opens in new tab) from the British Antarctic Survey (BAS), which reported the iceberg’s separation from the shelf.

Since the iceberg broke off, multiple satellites have flown over the area, taking images of the now-orphaned triangular ice fragment. BAS, which operates the Halley Research Station on the Brunt Ice Shelf, estimated the size of the calved iceberg to be 600 square miles (1,550 square kilometers). That’s about the size of the London metropolitan area and a little larger than Houston.

Related: Antarctica’s ‘Doomsday Glacier’ could meet its doom within 3 years

The calving is not related to climate change, BAS said in a statement, and was caused by “natural processes” that have been underway for more than 10 years. The iceberg calved along a crack known as Chasm-1, which BAS scientists have monitored since 2012. The gradual widening of Chasm-1 in fact prompted BAS to move the Halley Research Station 14 miles (23 km) inland in 2016. The outpost has not been affected by the calving, BAS said.

“Our glaciologists and operations teams have been anticipating this event,” BAS director Jane Francis said in the statement.

That said, the moon may have nudged the new iceberg on its way as the parting happened during the so-called spring tide, the “springing forth of the tide” that takes place around the new and full moons as a result of the moon’s gravitational pull, according to the U.S. National Oceanic and Atmospheric Administration (opens in new tab). In spite of the name, these phenomena have nothing to do with the season of spring!

The Sunday calving is the second such event in the past two years affecting the Brunt Ice Shelf, BAS said in the statement. BAS monitors the area using an automated network of high-precision GPS sensors located around the station as well as data from Earth-observing satellites.

“This calving event has been expected and is part of the natural behavior of the Brunt Ice Shelf,” BAS glaciologist Dominic Hodgson said in the statement. “It is not linked to climate change. Our science and operational teams continue to monitor the ice shelf in real-time to ensure it is safe, and to maintain the delivery of…