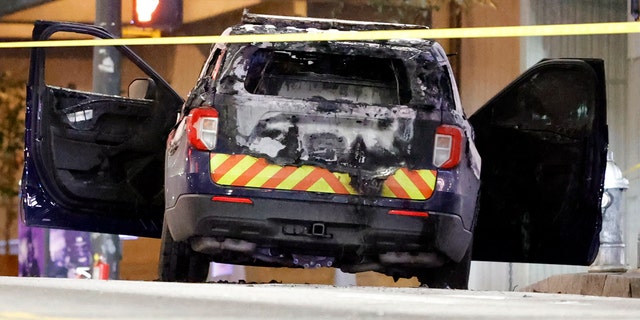 WASHINGTON – After a fiery protest broke out in Atlanta over the weekend, most Americans in the nation’s capital who spoke with Fox News said they believe property destruction is a form of violence.

“It is violence,” Ramona said. “I believe in peaceful protesting without destroying property.”

But Ronald, a D.C. resident, disagreed.

“I don’t think property damage is violence,” he said.

WATCH: PEOPLE IN DC ANSWER WHETHER PROPERTY DAMAGE CAN BE CONSIDERED VIOLENCE:

Anti-police protests broke out in Atlanta on Saturday resulting in explosions, damaged businesses and a burnt-out police vehicle. That evening, a CNN guest suggested property destruction didn’t amount to violence.

“I would call that violence,” another man in D.C., Severin, told Fox News. “Violence doesn’t have always to be physical. Violence can be loss of income, loss of money, loss of property to where people have to rebuild.”

Michael said: “Property damage is violence. The only reason we will destroy the property is to try to lash out or rebel.”

A burned police car sits on the street following a violent protest, Saturday, Jan. 21, 2023, in Atlanta, in the wake of the death of an environmental activist killed after authorities said the 26-year-old shot a state trooper.
(AP Photo/Alex Slitz)

An activist died in a gunfight last Wednesday after shooting a Georgia State Patrol trooper while protesting a new Atlanta police training facility, according to police. Afterward, activists called for violence against law enforcement and advocated for “reciprocal violence to be done to the police and their allies,” according to a post from a now-suspended Twitter account protesting the construction of the new police facility.

Despite the verbatim calls for violence from activists, freelance journalist David Peisner said that police, not protesters, instigated the only violence.

“You know, this idea that breaking windows or other acts of property destruction are the same as actual violence against humans, it’s kind of a dangerous and slippery concept,” Peisner told CNN’s Pamela Brown Saturday on “CNN Newsroom.” “The only acts of violence against people that I saw were actually police tackling protesters.”