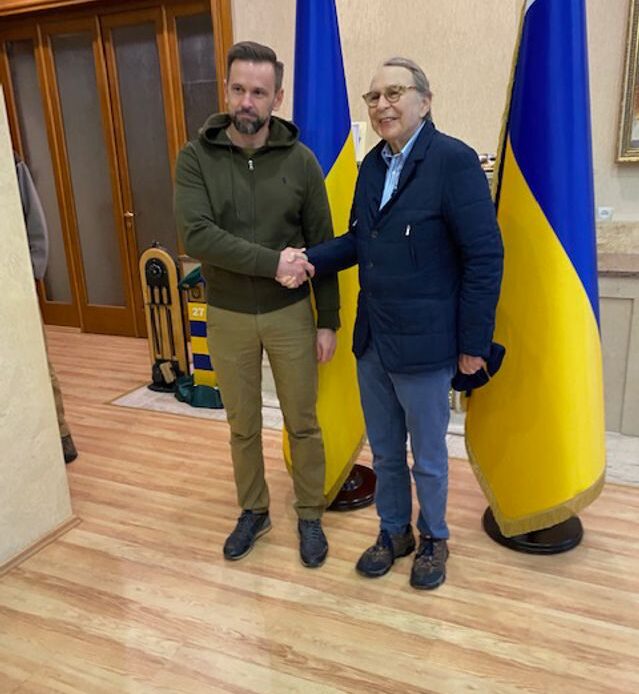 Mr. Pataki relayed her request to his friend

a real-estate developer and former U.S. ambassador to Finland. Outraged by Russia’s invasion, both men had traveled often to Ukraine to express support and deliver whatever food, clothes and supplies they could muster. Now they had a new mission: Find industrial-strength heaters to prevent

missile assault on the country’s power grid, water plants and other critical infrastructure from freezing Ukrainians to death in winter and paralyzing their fierce resistance.

Mr. Mack called U.S. manufacturers, but few had heaters to spare. Most of what they had wouldn’t help, since Ukrainian products work on 240-volt electricity, not America’s 120 volts. Eventually, Mr. Mack found Minnesota-based Pinnacle, which had 385 surplus heaters made for the European market in a warehouse in Amsterdam. Each heater can run for 31 hours and heat a 20,000-cubic-foot area—about the size of a hotel ballroom—on a single load of diesel fuel. Mr. Mack bought them all—at a steep discount, because Pinnacle wanted to help. On Jan. 12, he personally delivered the first of them to

governor of the western Ukrainian region of Zakarpattia, much of which is without power and lights for eight to 12 hours a day.

While many analysts have focused on the effect of the West’s indispensable military aid to Kyiv, such creative, targeted philanthropy is also essential if Ukraine is to win this war. I accompanied Mr. Mack on his recent visit and saw that surprising private acts of support, in coordination with Ukrainians on the ground, are being replicated in a thousand ways throughout the country. Whether it’s…