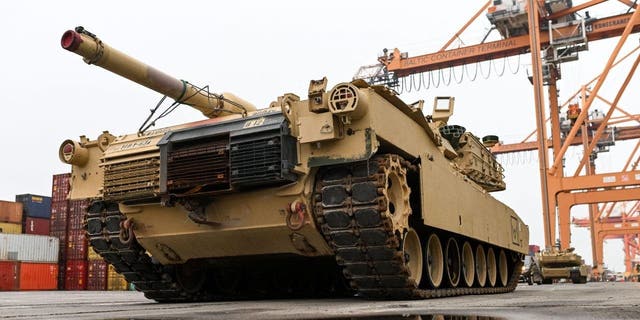 The president, joined by Secretary of Defense Lloyd Austin and Defense Secretary Antony Blinken, described the vehicles as the “most capable tanks in the world” and said they “will enhance Ukraine’s ability” on the battlefield.

Biden said Western aid to Ukraine “is not an offensive threat to Russia.”

“This is about freedom, freedom for Ukraine, freedom everywhere,” he added.

Senior defense officials told reporters Wednesday that between tanks supplied from the U.S., U.K, Germany, France, the Netherlands and Sweden, along with tank shipments expected to be announced by other European nations in the coming days, Ukraine can expect to receive “hundreds” of desperately needed tanks.

The Wednesday decisions come after weeks of stalled and frustrated negotiations with Germany in what one senior defense official described as the “product of good diplomatic conversations.”

A M1A2 Abrams battle tank of the US army that will be used for military exercises by the 2nd Armored Brigade Combat Team, is pictured at the Baltic Container Terminal in Gdynia on Dec. 3, 2022.
(MATEUSZ SLODKOWSKI/AFP via Getty Images)

“It really is remarkable if you look back over the last year to see the extraordinary shift in Germany’s security policy,” another senior defense official told reporters on background.

While Leopard 2 tanks from EU nations will require minimal turnaround time and will serve the immediate needs of Ukraine’s military forces, the shipment of Abrams tanks to Ukraine will take months.

“Coupled with this near-term commitment that the Germans have made on Leopards, we think this contribution by us with the Abrams represents the long-term commitment,” one official said.

Top U.S. defense officials, including Austin, had expressed reservations about sending Abrams tanks to Ukraine because of cost, maintenance requirements and the longer training periods needed to get Ukrainian soldiers up to speed on the combat vehicles.