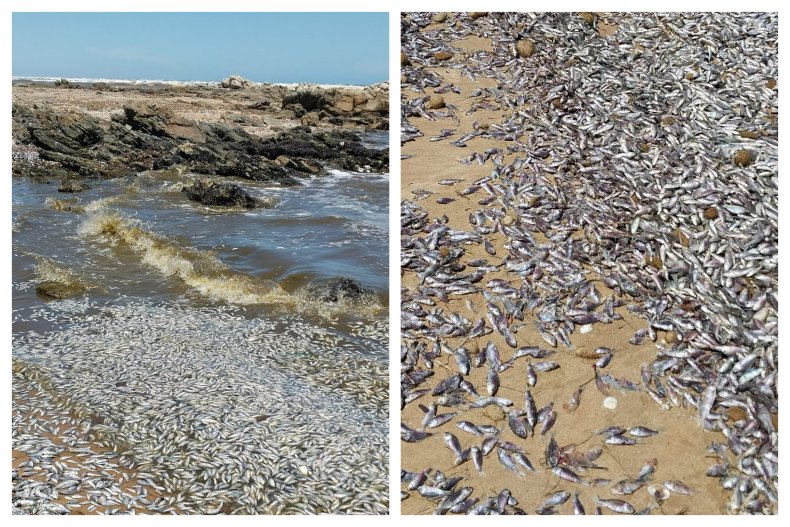 The sight of thousands of fish being washed out to sea from the rivers in Australia has spurred on calls to eradicate the invasive species by using a strange method: releasing a herpes virus.

Thousands of dead freshwater carp were found washed up on ocean beaches in South Australia from January 19 due to massive flooding in the river basin in recent weeks during their breeding season, leading to concerns about their invasive nature.

One beach that was hit badly by the plague of dead fish was Middleton Beach.

“It’s a very rare natural event. It’s a once-in-a-lifetime experience that very few living people have witnessed before. I have never surfed in a school of carp and probably never will again,” local resident John Cork-Gorringe, who posted pictures on Facebook on January 21, told Newsweek.

The Murray-Darling river basin has seen massive flooding in recent weeks, impacting over 3,000 homes in South Australia. This has coincided with the carp’s breeding season, with the high river flows having seemingly caused the river fish to be washed downstream.

European carp are an invasive species in Australia. In the 1960s, one genetic strain, the Boolara strain, escaped from a fish farm in Victoria and caused a population boom, leading to millions of fish spreading throughout the country, mostly via the Murray-Darling river basin. These carp feed via foraging in riverbeds, which can damage aquatic plants and disturb sediment in the water, making it harder for native fish to hunt and survive.

And such events as the recent floods have only made the numbers grow. “Carp are super-abundant right now because floods give them access to floodplain habitats,” a group of Charles Sturt University ecologists wrote in a Conversation article. “There, each large female can spawn millions of eggs and the young have high survival rates.”

It is thought that there are over 357 million of these carp in Australia’s rivers and wetlands, a number that may be rising due to the enormous flooding in the area allowing the carp to spread to newer places. In the Murray-Darling basin, the carp comprise up to 90 percent of all fish biomass in certain areas.

The recent floods have led to renewed calls to releasing the herpes virus, specifically Cyprinid herpesvirus 3,…