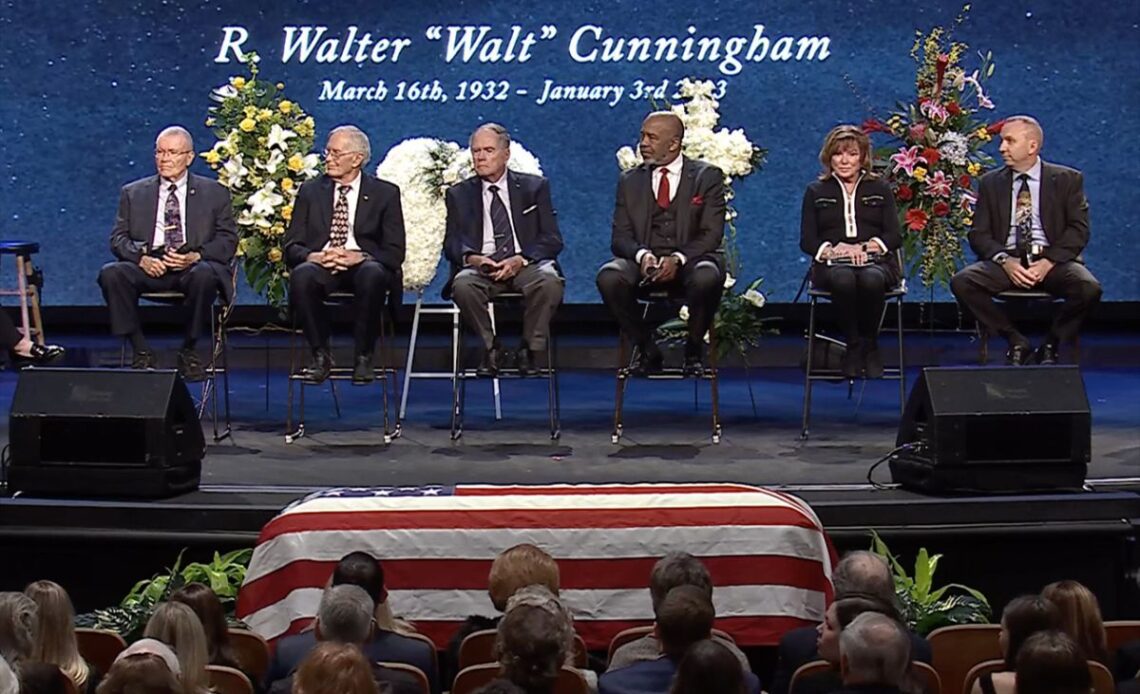 Judging just by the astronauts who came together to remember Walt Cunningham on Tuesday (Jan. 24), the late Apollo 7 pilot’s reach extended far beyond his 1968 launch into space.

The group, who took part in a panel discussion (opens in new tab) before a more traditional funeral service at Houston First Baptist Church, included two of Cunningham’s fellow Apollo colleagues and four NASA veterans who flew on the space shuttle and International Space Station — the latter well after Cunningham had retired. All of them said they were grateful for Cunningham’ friendship.

“Fred and I were in the same group of what we called the ‘Original 19,’ and of course we met all the astronauts when we first arrived and Walt was one of them,” said Apollo 16 moonwalker Charlie Duke, who with Apollo 13 lunar module pilot Fred Haise, joined NASA’s astronaut corps in 1966, two years before Cunningham made his first and only flight.

“He was a great friend, a great mentor and great spokesman for NASA throughout the years. We really miss him,” said Duke.

Cunningham died on Jan. 3 (opens in new tab) due to complications from a fall. He was 90.

The Apollo 7 mission made history in a number of ways. It was the first U.S. spaceflight to broadcast live television from space and it was the first time NASA launched a three-person crew (Cunningham’s crewmates, Wally Schirra and Donn Eisele, preceded him in death). Most importantly, though, the “101-percent successful” mission (opens in new tab) served as a critical shakeout cruise for the Apollo command module, which was redesigned after a fire claimed the lives of the Apollo 1 crew during a test on the launchpad.

“The first flight of a new spacecraft (opens in new tab) is always a critical mission,” said George Abbey, who as an engineer and then director, helped lead NASA’s efforts to land astronauts on the moon. “If you look at the contribution that Walt and his teammates made on Apollo 7, it was really the key to allowing us to make the lunar landing that we made in July of 1969. It wouldn’t have occurred without the success of that mission.”

“I will always have memories of Walt and his crew flying that flight,” said Abbey.

Bob Crippen did not fly into space until the first launch…