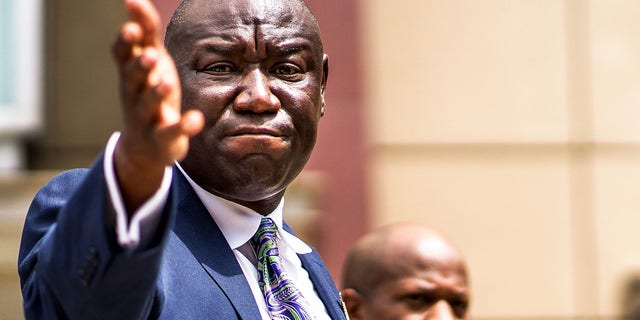 Speaking from the Florida Senate in Tallahassee Wednesday, Crump said he was giving “notice to Gov. DeSantis that if he does not negotiate with the College Board to allow AP African American Studies to be taught in the classrooms across the state of Florida, that [the three high school students] will be the lead plaintiffs in a historic lawsuit.”

Crump’s threatened lawsuit came a day after the College Board announced plans to revise the AP African-American Studies course.

While the College Board did not cite reasons for the plan to make changes, dustups surrounding its content were longstanding in The Sunshine State.

Gov. DeSantis previously blocked the course from Florida high schools, citing a violation of the state’s “Stop WOKE Act” signed into law last year while alleging that the material was “historically inaccurate.”

Attorney Ben Crump speaks at a press conference outside the federal courthouse on July 15, 2020, in Minneapolis, Minnesota.
(Getty Images)

“This course on Black history, what’s one of the lessons about? Queer theory,” DeSantis said earlier this week. “Now, who would say that an important part of Black history is queer theory? That is somebody pushing an agenda.”

The course contains tenets of Critical Race Theory (CRT) and elements of queer theory, according to a copy of the syllabus previously obtained by Fox News Digital.

A section of the course, titled “African American Studies: Movements and Methods,” includes a lesson on “Black Queer Studies” that teaches students about “the concept of the queer of color critique, grounded in Black feminism and intersectionality, as a Black studies lens that shifts sexuality studies toward racial analysis,” according to the syllabus.