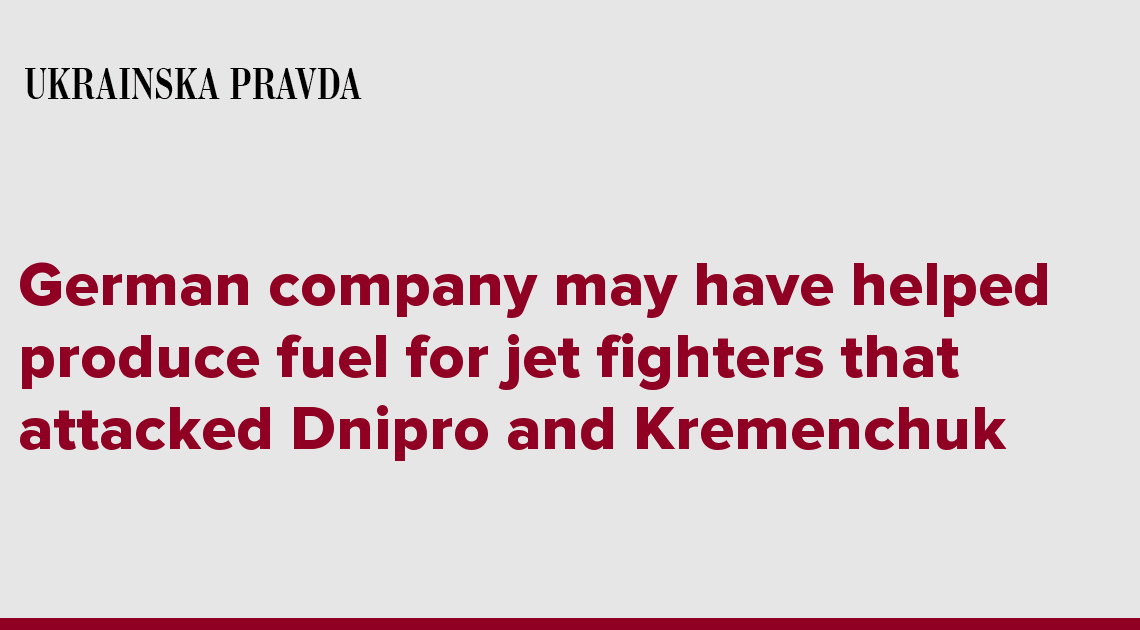 The largest German gas and oil producer Wintershall Dea, through a joint venture with Russia’s Gazprom, supplied paraffin for the Russian aircraft involved in the attacks on a high-rise building in Dnipro and a shopping centre in Kremenchuk, according to an investigation.

The investigation claims that the attack on a residential building in Dnipro on 14 January, as well as on a shopping centre in Kremenchuk in June 2022, was most likely carried out from the Shaykovka air base in western Russia.

Tu-22M3 supersonic bombers are stationed in Shaykovka. They are capable of launching Kh-22 cruise missiles at a target at a distance of up to 600 kilometres. According to data analysed by Spiegel and ZDF, the bombers likely used paraffin-based jet fuel, partly made from gas condensate produced by the Wintershall Dea and Gazprom joint venture.

A joint investigation by Spiegel and ZDF back in November 2022 showed a connection between the production of gas condensate and the supply of fuel for Russian military aircraft.

Wintershall Dea has been developing deposits of the so-called Urengoy gas field since 2008. Thereafter, Gazprom transports the gas condensate to the Surgut processing plant. Part of the gas condensate processed there was regularly supplied to the oil refineries of Lukoil company in Perm, Tatneft in Nizhnekamsk and Rosneft in the Samara Oblast.

These three refineries in turn delivered over 8,000 tons of paraffin between June 2022 and October 2022 to the Shaykovka airbase, from where Russian bombers launched attacks on Ukraine.

Wintershall Dea denies the accusations of the investigators and claims that they have no influence on where in Russia their products are delivered.

As Spiegel and ZDF state, Wintershall Dea did not make any decisions about exiting the Russian market or limiting its activities there after the annexation of Crimea in 2014 or immediately after the full-scale invasion of Russia in 2022. In addition, the investigation claims that Wintershall Dea paid “hundreds of millions of euros in taxes to the military coffers of the Russian state” in 2022.

The German company announced its intention to withdraw from Russia on 17 January, three days after the attack on the Dnipro. At the same time, the company did not name specific terms, and indicated that one of the reasons for such a decision was…