Got time? At this slow grocery store check-out lane, a leisurely chat is OK 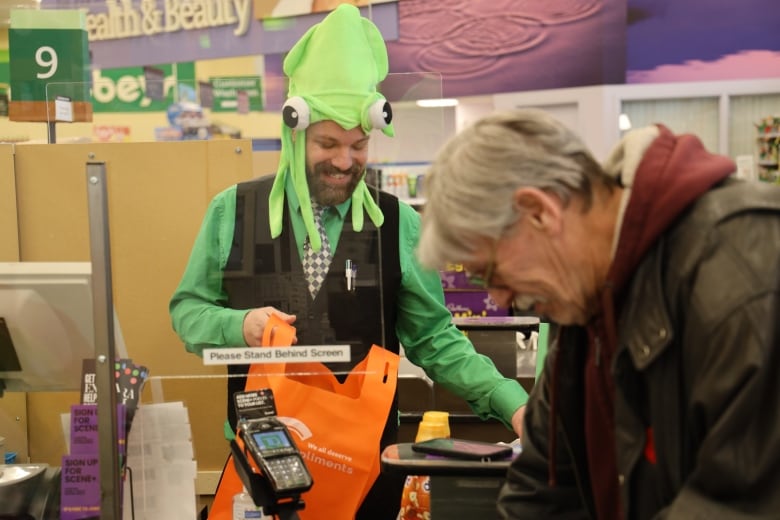 Jason Rutledge is not one to shy away from conversation. But that’s a quality you would expect from a man wearing a green hat shaped like a squid.

And that’s why the grocery store cashier with the huge grin and infectious laugh can often be found behind the register of the new “slow social lane” at an Edmonton Sobeys — a check-out lane where customers can take as long as they want.

“I look at the time that I have with these people … our conversations, especially, are very sacred to me,” Rutledge said.

For years, customers like Karen Just have sought out Rutledge to scan and check out their groceries.

“It’s always nice to come in somewhere where someone’s got a smile on their face.”

Last week, the grocery store officially designated the slow lane, which is staffed by Rutledge and other like-minded cashiers.

“I can turn any lane into a slow lane,” laughed customer Carolyn Krausher of her experience with the new checkout.

“COVID [has] kinda isolated us. It sorta divided us,” he said, noting that some customers were there to get “a little bit of love from Jason, I guess.”

Sobeys is far from the first grocery chain to slow things down.

In 2017, the BBC reported that supermarket chain Tesco would introduce a “relaxed lane” at certain times of day to make life less stressful for some customers who needed more time. The pilot project was developed in partnership with Alzheimer’s Scotland.

In September 2021, Dutch grocery chain Jumbo announced a goal to open 200 Kletskassa or “chat checkouts” across the Netherlands within a year. According to the chain, the concept that was first introduced in 2019 aimed to reduce and prevent loneliness and is for those “who have the time to enjoy a chat during the check-out process.”

From quick chats to deep discussions

Conversations in the Sobeys slow social lane in Edmonton can range from seconds to sometimes up to 15 minutes, according to Rutledge, and the topics of discussion can…