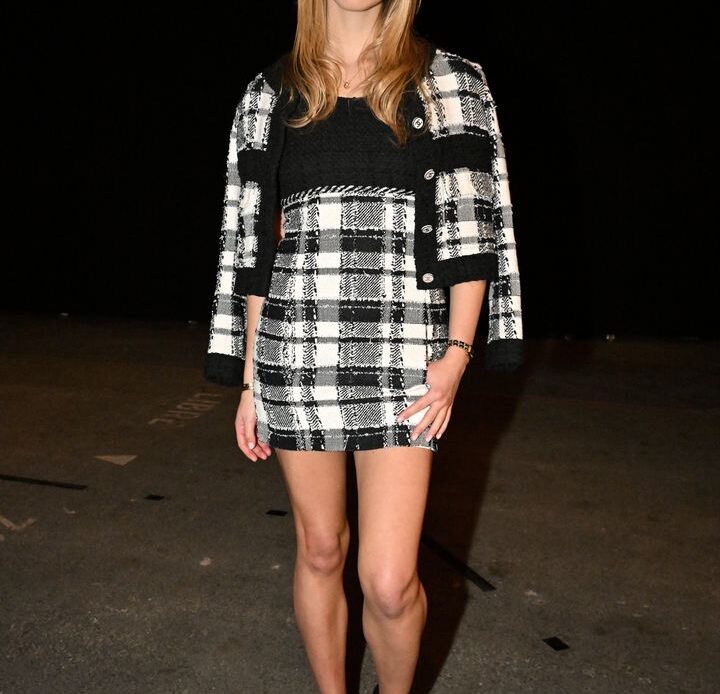 The 18-year-old bore a striking resemblance to her famous mother in a black-and-white Chanel jacket and minidress. She was seated in the front row, alongside actors Lucy Boynton and Sadie Sink.

Journalist Derek Blasberg shared a few behind-the-scenes photos that showed Martin happily posing with Boynton and Sink and, later, enjoying an intimate dinner on Instagram. In the accompanying caption, Blasberg noted that legendary Chanel designer Karl Lagerfeld, who died in 2019, had recognized Martin’s sense of style early on.

“Karl Lagerfeld met Apple Martin when she was 4 years old and declared that one day she’d be a Chanel girl,” he wrote. “It happened today!”

Blasberg’s photos drew a plethora of compliments from some of his famous pals, as well as a playful correction courtesy of Paltrow.

“Actually, she was ONE,” the “Shakespeare in Love” and “Royal Tenenbaums” actor quipped in a comment.

Predictably, Martin’s presence at the show prompted a number of media outlets to once again stoke the debate over so-called nepotism babies. The buzzy term, often abbreviated to “nepo babies,” has been used to derogatorily describe children born to rich, powerful or famous families, especially those who go on to enjoy success in a field one of their relatives also worked in.

Compared to many of her contemporaries, though, Martin has mostly avoided the spotlight: Paltrow recently confirmed that her daughter began college last fall, but she hasn’t specified which school she’s attending or her field of study.

With the 2023 Met Gala planned as a tribute to Lagerfeld’s work, only time will tell if Martin will once again fulfill her…