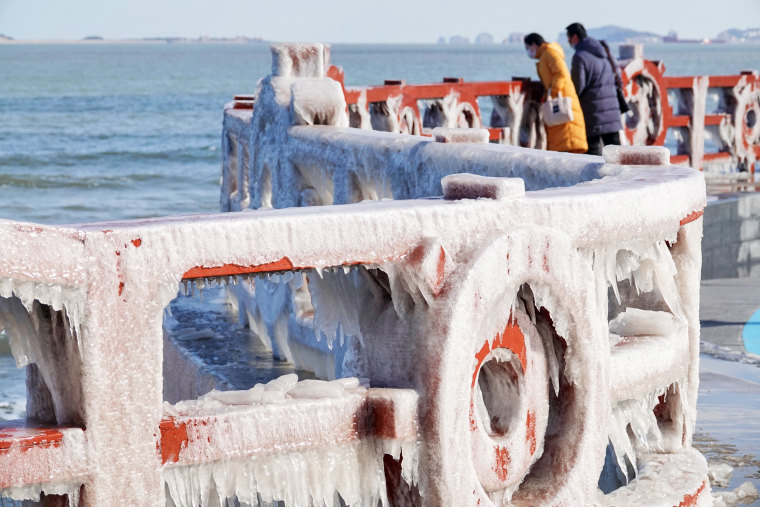 Frigid winter weather gripped East Asia for the second straight day on Wednesday, causing several deaths and multiple injuries in Japan and a scramble for flights out of South Korea’s resort island of Jeju following delays by snowstorms.

South Korea’s Ministry of the Interior and Safety didn’t immediately report any major damage or injuries from subzero temperatures and icy conditions that have affected most of the country since Tuesday.

But at least eight roads and 10 sea routes remained closed as of Wednesday afternoon. About 140 homes in capital Seoul and nearby regions reported busted water pressure pumps or pipes as temperatures dipped to around minus 5 degrees to minus 4 degrees Fahrenheit across the mainland.

A man died in Oita, southern Japan, after being hit by a fallen tree and two more deaths in the northern prefecture of Niigata were being investigated in connection with the cold weather, officials said.

Two other people were found without vital signs in Okayama, western Japan. Deputy Chief Cabinet Secretary Yoshihiko Isozaki told reporters that the deaths could be linked to accidents while removing snow and urged residents to refrain from such activities when nobody else is around to help in case of an emergency.

About 400 homes around the country were without electricity due to power line damage caused by fallen trees, the Economy and Industry Ministry said. It said traffic disruptions caused by the snow also caused delivery delays at convenience stores in western Japan.

Thousands of people using train services in Kyoto and Shiga prefectures in western Japan were forced to stay overnight in carriages or stations, and 13 were taken to hospitals, the Fire and Disaster Management Agency said. Vehicles on major roads across the country were left stranded and hundreds of flights canceled. Kyoto prefecture reported more than 30 injuries, mostly by falling.

Air traffic returned to normal after hundreds of flights in and out of Jeju were grounded Tuesday because of strong winds and snow, stranding an estimated 40,000 travelers who had visited the resort island for Lunar New Year holidays.