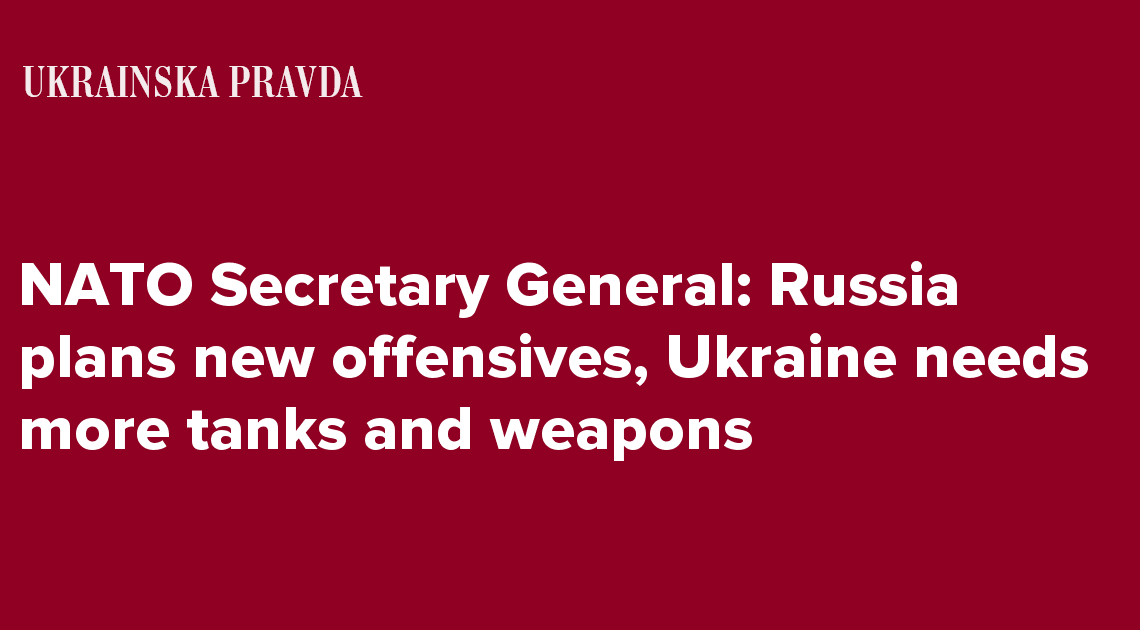 NATO Secretary General Jens Stoltenberg has called on members of the Alliance to strengthen support for Kyiv, including tanks and other heavy equipment.

He said this in an interview with German outlet Welt, writes European Pravda.

“There are no signs that President Putin has changed his goal of dominating Ukraine. There is nothing to indicate that he is preparing for peace. He is ready to sacrifice tens of thousands of Russian soldiers in this completely unjustified war. He has mobilised more than 200,000 troops, and plans to mobilise even more, and [he] is actively working to get more weapons from other authoritarian states such as Iran and North Korea. We know that Russia is planning new offensives, and we must be prepared for them. That is why it is so important that we continue to strengthen our support for Ukraine,” Stoltenberg said.

According to him, most wars end at the negotiating table, but what Ukraine can achieve in such negotiations is inextricably linked to the military situation.

“Therefore, if we want to find a solution in which Ukraine will survive as a sovereign and free country, then we need to act now. More heavy equipment is necessary for Ukraine. That is why I welcome any announcement about the supply of main battle tanks to Ukraine,” the secretary general said.

Stoltenberg also believes that the risk of Russia using nuclear weapons is low at the moment.

“But Russian nuclear rhetoric is irresponsible. It’s dangerous. Russia must know that a nuclear war can never be won, and therefore it should never happen. Of course, we are very closely monitoring what Russia is doing, and so far we do not see any changes in the Russian nuclear forces. If this were the case, we would certainly react,” he said.

When asked when the war in Ukraine will end, Stoltenberg said: “No one knows when this war will end. What we know is that if you want peace tomorrow, you must support Ukraine today. It sounds strange, but the path to peace lies through the supply of weapons.”

Note, on 25 January, a decision on the transfer of M1 Abrams tanks to Ukraine may be announced, which should also unlock Germany’s Leopard 2 supplies.

Scholz is expected to announce the provision of tanks to Ukraine on Wednesday during a speech in the Bundeswehr, scheduled for 14:00…