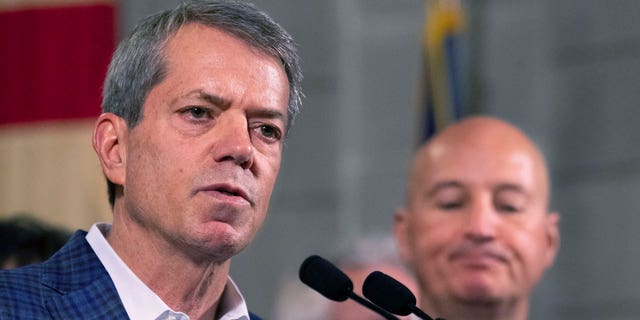 Nebraska Gov. Jim Pillen delivered his first State of the State address in the state Capitol on Wednesday, spelling out plans to drastically cut taxes while increasing funding to state schools.

“What we do with the people’s money this session is critical for my grandbabies, and yours, and the generations to come,” the Republican governor said in an address before the Nebraska Legislature. “We all agree — we are taxed way too much. Our tax policy chases our kids and grandparents out of the state. We can’t grow Nebraska that way.”

Pillen reiterated his plans announced earlier this month to increase K-12 public education funding by more than $2 billion over the next six years while cutting income and property taxes amounting to billions more through 2027.

NEBRASKA SWEARS IN JIM PILLEN AS ITS 41ST GOVERNOR

Pillen’s proposed two-year budget would hold annual growth to just 1.3%, increasing spending by $164.6 million next fiscal year over the current year, and keeping the budget nearly flat the following 2024-25 fiscal year with a proposed $500,000 increase. Nebraska’s annual budget is about $4.5 billion.

The plan relies on leveraging the state’s huge cash reserve of $1 billion. Fiscal forecasters predict a balance of $2.3 billion by this summer, with much of that additional revenue collected through federal pandemic recovery funding and boosts from rising inflation. Some critics of the tax-cutting plan fear that with pandemic funding now ended and predictions of a possible recession, the state could see its coffers drained under the cuts.

Much of Pillen’s plan looks a lot like that of the previous governor, Pete Ricketts, who endorsed Pillen and contributed significant amounts of his own money to seeing Pillen elected last November. Ricketts was sworn in just this week to the U.S. Senate after Pillen appointed him to replace Ben Sasse, who resigned earlier this month to take a job as president of the University of Florida.

In his 2021 State of the State address, Ricketts touted a proposed constitutional amendment that would have limited the growth of local government property taxes to 3% per year. This year, Pillen is pushing a bill that would lower property taxes by limiting year-over-year tax-collections by schools — the biggest driver of property taxes — to a 3% increase in revenue per…