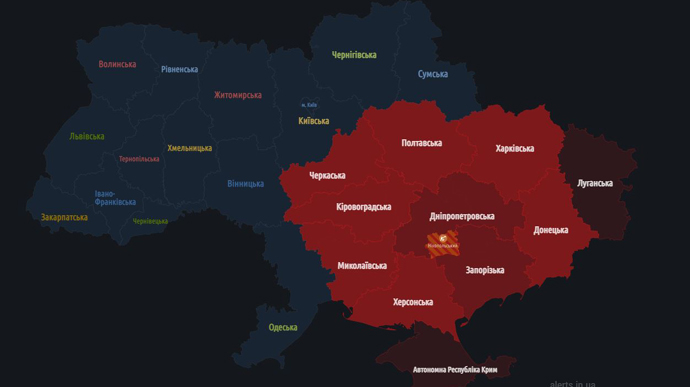 The Russian occupiers are trying to overload the Ukrainian air defence system, and aerial targets are already being shot down over Ukraine. Mykolaiv authorities report about Russian drones and the probability of missile launches.

Quote from Yermak: “Don’t ignore the air-raid siren. The enemy is now trying to overload our air defence system, and aerial targets are already being shot down in several oblasts.”

Details: The head of the Mykolaiv Oblast Military Administration reported that three groups of Iranian-made Shahed drones have been spotted in the sky.

Sienkevych added that there are also three Russian Tu-22M3 bombers in the sky.

As of 22:30, the air-raid siren is sounding in the east and south of Ukraine.

Local Telegram channels in Dnipro report the sound of explosions in the city, but it is unclear whether it is the work of air defence or Russian strikes.

The media outlets also report the sound of explosions in Vilniansk, a city in Zaporizhzhia Oblast.