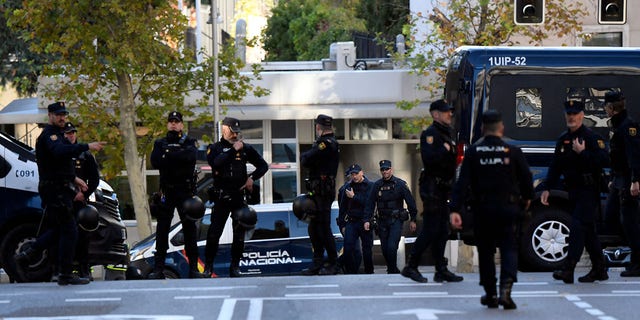 Spain’s interior ministry said Wednesday police had arrested a man on suspicion of sending six letters containing explosive material to Spain’s prime minister and to the U.S. and Ukrainian embassies in the country.

The Spanish national was arrested in the northern city of Miranda de Ebro and a search of his home is “still underway,” the ministry added in a statement, according to the Associated Press.

An employee at the Ukrainian embassy in Madrid was slightly injured while handling a letter in November. A bomb squad also destroyed an explosive device that was dispatched by regular post to Spanish Prime Minister Pedro Sánchez’s official residence, which also serves as his office, in the same month.

Letters with similar characteristics were sent to Spain’s Defense Ministry, a European Union satellite center located at the Torrejón de Ardoz air base outside Madrid and to Instalaza, an arms factory in northeastern Spain that makes grenades sent to Ukraine.

LETTER BOMB FOUND AT US EMBASSY IN SPAIN, THE SIXTH DEVICE TARGETED TO HIGH-PROFILE INDIVIDUALS IN 24 HOURS

Spanish police stand guard near the US embassy in Madrid, on December 1, 2022, after they have received a letter bomb, similar to one which went off at the Ukrainian embassy.
(OSCAR DEL POZO/AFP via Getty Images)

An envelope intercepted at the American Embassy’s security screening point in December was detonated by authorities after a wide area was cordoned off by Spanish police around the embassy in the center of Spain’s capital.

A Spanish policeman stands guard near the US embassy in Madrid, on December 1, 2022, after they have received a letter bomb, similar to one which went off at the Ukrainian embassy.
(OSCAR DEL POZO/AFP via Getty Images)

Days before Wednesday’s announcement, the New York Times had reported that U.S. officials believe Russian military intelligence officers directed associates of a White supremacist militant group based in Russia to carry out the letter bomb campaign in Spain last year.

According to the Times, investigators have focused on the Russian Imperial Movement in recent weeks.

In 2020, the U.S. State Department designated RIM and its members as “global terrorists.” Former President Donald Trump’s executive order was considered the “most significant expansion of federal terrorist sanctions designation authorities since 9/11,” the State Department said at the time.

Spanish policemen stand next to an Ukrainian flag…