Training of Ukrainian soldiers on Abrams tanks will start in ”weeks, not months”  White House 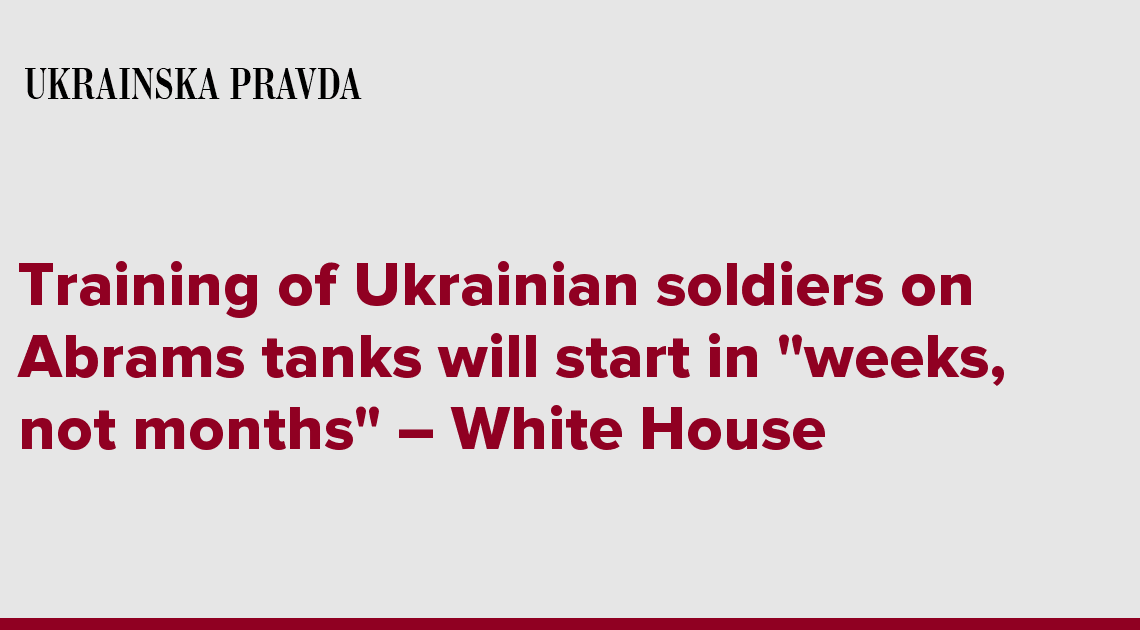 The White House expects that the Ukrainian troops will start training on the American M1 Abrams tanks, the supply of which was announced on Wednesday, within weeks.

Source: John Kirby, Coordinator for Strategic Communications at the National Security Council in the White House, in a commentary for an American media outlet CNN, reports European Pravda

Quote: “There was a lot of diplomacy that went into the announcements today. The decision that you saw today, by both Germany and the United States, was several weeks in the making through many, many discussions with the Germans and with our allies,” Kirby noted.

Kirby stated that the Pentagon will most likely need “weeks, not months” to work out and implement the training plan for the Ukrainian troops on the M1 Abrams tanks. Herewith, he emphasised that the purchase of the tanks and completion of the preparations will take months.

“How long is it going to take? I really am not able to say. They’re (Pentagon – ed.) still working their way through that. We don’t think that it will take too much longer. You know, I’d say probably, you know, weeks, not months before they’re able to really nail down the details of this and start to start to put it in place, the training regimen”,  Kirby stated.

Earlier on Wednesday, the German government officially announced the decision to transfer Leopard 2 main battle tanks to the Armed Forces of Ukraine, and to allow re-export to other countries that also want to do so.

On Wednesday, US President Joe Biden confirmed his intention to transfer 31 M1 Abrams tanks to Ukraine, equal to one Ukrainian battalion, to strengthen its defence capabilities against the backdrop of Russian aggression. Together with the tanks, the USA will ensure the training of the Ukrainian military and provide spare parts as soon as possible.

According to Spiegel, at this stage, the European allies are discussing the joint transfer of 80 Leopard 2 main battle tanks to Ukraine in order to form two battalions consisting of 40 tanks.