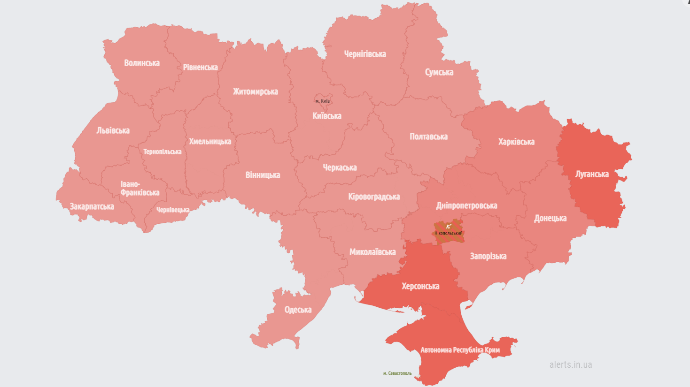 An air-raid siren was sounded throughout Ukraine on the morning of 26 January, the head of the President’s Office reported the downing of Russian missiles.

Source: alerts.in.ua; Nataliia Humeniuk, Head of the Joint Press Centre for Operational Command Pivden (South), on air during the national joint 24/7 newscast; Andrii Yermak, Head of the Office of the President, on Telegram

Details: An air-raid siren was sounded on the territory of all oblasts of Ukraine on the morning of 26 January.

According to Nataliia Humeniuk, another large-scale missile attack is possible during the air-raid siren.

Quote: “A new large-scale missile strike can be launched right now. We are currently observing the activity of enemy strategic aviation from the Caspian Sea.”

More details: According to Humeniuk, there are missile carriers in the Black Sea that are ready to launch Kalibre missiles at any moment.

She reported that three such missile carriers with a total volley 20 missiles are currently known about.

At 8:27, Andrii Yermak, Head of the Office of the President, reported that “first Russian missiles were shot down”.

Power engineers have implemented emergency power shutdowns in Kyiv city and the oblasts of Kyiv, Odesa and Dnipropetrovsk because of the Russian missile attack threat.