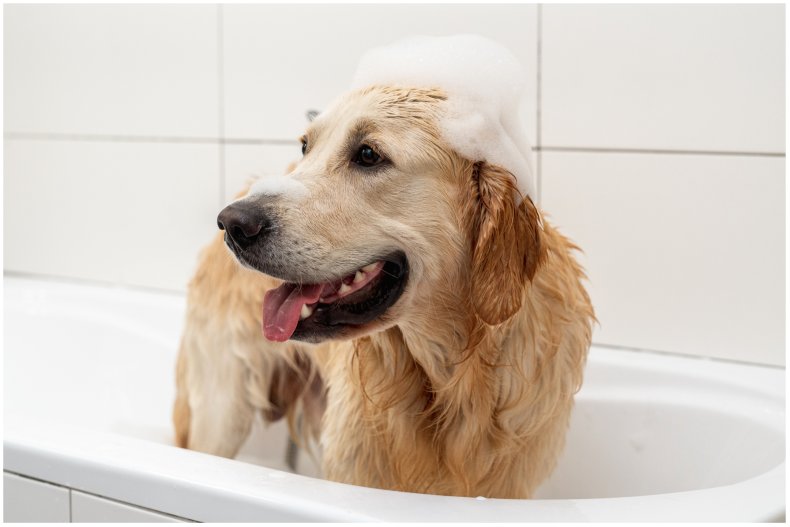 A video of a “demanding” golden retriever waiting to be washed in the shower has gone viral.

In the clip posted to TikTok, which can be seen here, Elton the golden retriever displays distinctly diva-ish tendencies.

As the video begins, Elton’s owner walks into the bathroom to find the pooch lying on the shower base, seemingly wanting to be washed.

Captions on the video read: “So, ever since we taught Elton how to go into the shower by himself, after every walk, he started taking himself into the shower and refusing to leave until he washes his paws off. Little diva.”

She added: “Many dogs enjoy a routine in a human world where we can be very unpredictable.”

According to the American Kennel Club, the occasional bathing of a golden retriever puppy will acclimatize it to getting in the bath, shampooing and drying later in life.

It said: “Part of the maintenance protocol at this age [8 weeks to 2 years] calls for trimming around paws, ears, and tail.

“They generally don’t have a long, thick coat at this point but this is good practice for you when he/she is small and manageable. Plus, it establishes a routine and comfort zone for both owner and puppy.”

Rhoades added that Elton’s behavior showed he had a history of being carried to the shower.

She said: “There’s also motivation to consider and in this situation, with dogs, we either force them into situations or we can reward them for the ‘right’ choices that they make. It’s plausible that this dog enjoys showers as they found him already in there.

“My hypothesis is that this is a mix of routine and reward. The dog has a long history of getting into showers after a walk and if he finds it enjoyable, he’s more likely to repeat this on his own.

“Some dogs enjoy water and will get into it at every opportunity while other dogs will actively avoid it. Golden retrievers were originally bred to retrieve birds during hunting and that included sometimes going into the water.

“Because of this, they have a coat that is specifically adapted to keeping them warm and dry. That doesn’t mean that every golden retriever loves water, but they are more likely to enjoy it than most…