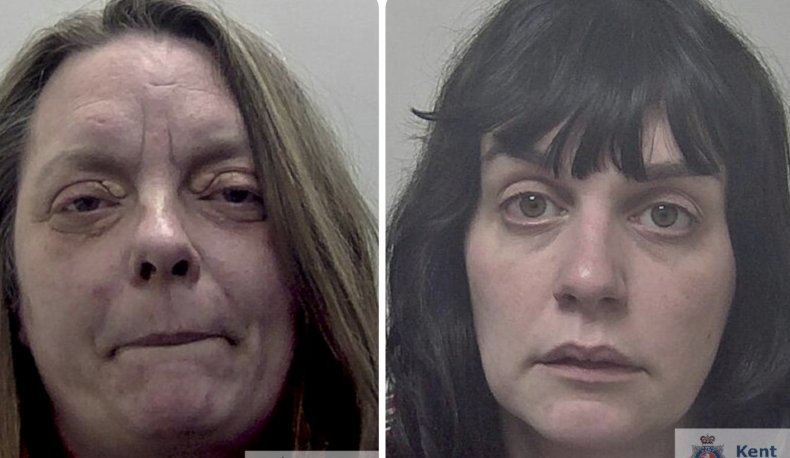 Kirsty Wallis, 35, and Angela Lawrence, 48, scammed the retiree inside her home at night after breaking into her key safe.

After escaping with the widow’s beloved gifts worth 10,000 British pounds (nearly $12,000) from her late husband, they fraudulently used her bank card to buy chocolate and wine.

The pair committed their crime after Wallis targeted another client suffering dementia, stealing his father’s rare WWI medals, then selling them as scrap metal.

Dressed in her caregiver uniform, Wallis crept into Gladys Spratt’s home one night in Ashford, Kent, in southern England, in October 2019.

The elder Spratt was woken up and became confused by Wallis’ and Lawrence’s presence, as she only has daily visits from the care company.

But mother-of-three Wallis lied, claiming that the police had asked her to pay the visit after a disturbance in the area.

Spratt noticed Lawrence picked up her dressing gown and placed it over a bag which she kept next to her bed.

The next morning, Spratt discovered her bank cards, bus pass, and jewelry had disappeared.

A police investigation revealed that moments later, Lawrence used Spratts’ bank card to buy fuel, wine, and chocolate at a gas station around 20 miles away.

That same afternoon, Wallis received 150 British pounds (about $179) for scrap gold and silver from A Simmonds jewelers just 15 miles from the scene of the burglary.

None of the jewelry has been recovered by police.

During the subsequent probe, officers discovered an antique dealer’s receipt in Wallis’ car for medals, coins and cutlery sold for 45 British pounds ($53).

The medals were originally awarded to S. A. Benson for his heroics during WWI and later passed down to son Eric as heirlooms.

But after Eric developed dementia, Wallis became his caregiver and then stole them from his home in Canterbury.

Both defendants were jailed Thursday for a combined sentence of more than four years for burglary and theft at Canterbury Crown Court.

Eric’s niece Christine told the court in a victim impact statement: “Memories and thoughts around our aunty and uncle are tarnished by the selling of our grandfather’s medals.

“Our memories of him are now…